KIM WESTWOOD: ANOTHER AUSTRALIAN WRITER ON THE RISE

Who Is Kim Westwood?

Kim Westwood is another member of what appears to be a vast pool of Australian talent on the rise. She may not be a name you're familiar with because she has just begun to get published and doesn't have a book out yet. But she is a name you should remember, because she brings a unique style and outlook to fantastical fiction. It's a contemporary, fresh approach that's been noticed by awards judges and year's best editors alike.

Westwood's progress has been steady but definite. In 2002, Westwood won Australia's Aurealis Award for best horror story. In 2004, she attended the Clarion South Writers Workshop and received a Varuna Writer's House Retreat Fellowship to work on a novel. This year, she has stories in the Hartwell/Cramer edited Year's Best Fantasy #5 (just out) and The Year's Best Australian SF and Fantasy, as well as stories in The Devil in Brisbane anthology and Aurealis #36. She's working on her novel and a story cycle. 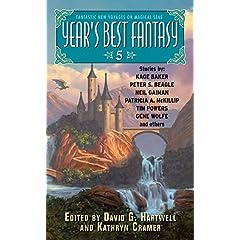 In a story like "Tripping Over the Light Fantastic," reprinted in The Year's Best Australian SF and Fantasy, Westwood shows a real talent for combining the every-day and a precise character study, while also allowing an atmosphere of wonderful strangeness enter the narrative, as in this passage:

Outside [Gabrielle’s] paint-peeled bedroom window the freshly planted real estate sign shouts "renovate or detonate!" Limned with reflective strip, it glows in the dark, a message of portent with each passing car. She sighs. Just once, she wants something to remain intact in her life. The moths in her wardrobe and the silverfish in her drawers don't agree. Immune to camphor they will gorge and move on, a slithering, fluttering battalion, to the next in line of doomed inner-city rental properties.

Minor characters receive adroit mini-descriptions—for example, a receptionist "sheathed like a lizard in velour, has been sucked of her red corpuscles." All within a contemporary setting that is likewise described with precision. In this story, Westwood is a writer who sees and writes about the real world but allows her imagination to more precisely describe it by transforming it. Or, more accurately, her view of the world is naturally surreal and thus anything her eye alights upon is automatically transformed by that view.

In the Year's Best Fantasy selection "Stella's Transformation," on the other hand, we are already in an alternate world, either for real or because the narrative is irrevocably shaped by Stella's point of view. (Some readers may think the distinction matters, that it should clearly be one or other. But it doesn't matter, and, thankfully, Westwood clearly doesn't think it matters, either.)

The whole of Sam's City Gym had stopped to watch Stella, who'd caught her t-shirt in the Universe Multi-station again. As a high tight ponytail sped her way, she didn't like to remember why she had agreed to a personal trainer. It had been an act of desperation, post-relationship, in the tunnel no light.

But little bits of description keep echoing in a strange way. Like, "The gym resumed its nightly rhythm; the Universal clanged with the exertions of people who had loved and lost." And, "Across the road a video shop illumed the dusk, rows of naked bulbs burning moths against the latest blockbuster titles." It's a mood softer than noir but still its cousin.

This feeling is satisfied in the form of further evidence when a man named Vince turns up at Stella's home:

[Vince] turned off the parrot lamp. Settling her on the living room couch before seating himself beside her, he opened his briefcase and took out a small book. Vince read to Stella in the darkness with a caver's torch on his forehead, turning the pages like an archaeologist separating papyrus, a voice like warm honey pouring her slowly into dream.

From there, Westwood performs a graceful, almost blissful downward spiral into dreams and the surreal. The promise of strangeness somehow implied in the opening paragraphs comes to fruition gently, purposefully.

[Vince] smiled, and she had a sudden image of words flaking like filigree off each page and falling coruscant to ground as he read each book until it was empty, then gently gathered the little piles of shiny sentences into his briefcase before leaving.

The Cyclops of light on his forehead picked out the pinks of neatly manicured nails as one finger stretched out to capture the corner of a page and slid behind it. Already she was diving slow motion towards a disintegrating daisy, the white kicking legs disappearing into a hazy reflective sheet that buckled and warped as it swallowed her.

When she surfaced, breaking the meniscus with a soft slap, she was in the municipal pool. Above her, halogen bulbs glowed in an early lusterware pink, lighting empty lanes with large onyx moons.

Some of Westwood's transitions bring to mind the montages and jump cuts of the surreal filmmaker Nicolas Roeg, especially in films like The Man Who Fell to Earth and Don't Look Now, although the mood of Westwood's story is completely different.

I like that, even in such short fictions, Westwood is not afraid to attempt these logical "illogistics." There’s a certain fearlessness to the prose that lends it authority. Occasionally, the reader can see subtle fault lines where the varying strands of sur/reality may not quite mesh, but on the whole the technique is successful. Perhaps related to this subject, Westwood's metaphors and extended metaphors are ambitious and complex, and often in support of the shifts mentioned above. They work the majority of the time, but when they sometimes show the strain, there is a corresponding flutter in the effectiveness of the story’s various levels. (I'm not trying to suggest in this blog entry that Westwood is as yet a perfect writer, but that the stories are accomplished, subtle, interesting, and very much alive at the sentence and paragraph levels.)

Now, the careful reader will notice I haven't really mentioned plot, either with regard to this story or the other story. It's not so much that the stories have no plot, but that the plot is entirely wedded to the viewpoint character and follows the contemporary mimetic model. Do lots of things happen in these stories? Yes, but in the same way they happen in our lives, just laced with the fantastic, or the suggestion of the fantastic.

Stella walked home past the pool, but the blue had lost its allure. A distant frontier was reaching in from the edges of the city, sharpening her senses to other things: the glint of metal on passersby, debris gathering shadows below walls splecked with sun. The spurs on her boots tssked gently.

I find Westwood's work compelling in part because the meaning of it exists at the micro level as much as at the macro level. Some writers you can skim and you don't lose anything. Skimming Westwood and writers like her is tantamount to losing track of the story.

That said, I have deliberately avoided comparing Westwood to other writers. Why? Because I find such comparisons corrosive and lazy, even though I’ve indulged in them in the past. And because, while Westwood's style could be compared to that of a couple of other writers, it is not similar enough, in combination with her world view, for the comparison to be useful.

And, finally, it is fascinating that Westwood is only one of a current crop of interesting fantastical/surreal writers coming out of Australia, any number of which I could have profiled, and most of which I hope to name and talk about in the months leading up to my Australia trip and thereafter. Something is definitely happening Down Under, and has been for some time.

A Short Interview with Kim Westwood

How long have you been writing?
Since I could hold a pencil, but I didn't think of myself as a writer, who might even be published, until about 2002.

Did you always think you were writing “genre” fiction and when did you first encounter the genre community?
I still don't think I'm genre writing. I have problems with the whole notion of genre. In a sense, all fiction is speculative, fantastical. But the genre idea happened after [my story] “The Oracle” won a local speculative fiction award, then was published in Redsine 9, then won an Aurealis in the horror category. The genre community happened after I went to Clarion South.

What do you most like about fantastical fiction?
I like being transported out of my own world and into another's. I like any fiction that takes reality and twists it to other ends; fiction that confounds the notion of “normal” and that imagines “what if,” with just one small change, one adjustment away from the usual, the expected...

Do you see yourself as an Australian writer as opposed to a “writer”? And if so, what does that mean to you in terms of influence?
I do see myself as an Australian writer, and its landscapes, people, strongly influence my work. But I've also traveled a lot, and lived for periods of time in other countries, and have been enormously affected by them. In the end it all enters the mix—and comes out changed.

(BTW, I enjoyed the interview.)

It's so great you did this! I was at Clarion with Kim, and we were all blown away by her extraordinary talent. She's one of the most unassuming people you'd ever hope to meet, too. A lovely lady, and I think one of the best writers this country has ever produced. All fingers and toes are crossed for her to achieve fabulous success -- she gives all of us a good name. Karen (Miller)

Having stayed with Kim at Varuna for a couple of weeks, we had many a discussion on the problems of genre "pigeon-holes". Kim's single-minded dedication toward her writing was difficult to emulate. But reading her stuff, you can see the hard-work doesn't translate into tedious narrative... Congrats Kim. (Peta Johansen)

Just found some interesting stuff on the upcoming Chronicles of Narnia film. narnia