What do I know about Jim Kelly? He’s a great writer, with a body of short stories that I would have killed to write. I know he’s fun to hang out with. I know he’s painstakingly considerate to and yet honest with his students at Clarion. Not only does he know a lot about writing, but he knows how to convey that knowledge to others. I hate to get all mushy, but it’s nice when a great writer turns out to be a great human being, too.

Now he has a new novel, Burn, out from Tachyon Press. It’s intelligent, thoughtful, and provocative. On the Tachyon site they summarize it as follows:

The tiny planet of Morobe's Pea has been sold, and the new owner has a few ideas. He has renamed it Walden, and voluntary simplicity is now the rule. It will become a rural paradise for everyone who embraces Thoreau’s philosophy.

But the previous tenants have their own ideas. And they are willing to set themselves on fire to defend them...

And, as Matt Cheney says on Mumpsimus, it’s "a science fiction novel that explores some of the ideas of the Transcendentalists, particularly Henry David Thoreau." And: "[The novel] may seem at first like a space opera with firefighters and Transcendentalists, but there's more going on beneath its compelling story -- questions of progress and responsibility, intervention and witness, technology and truth. The ending is extraordinary, forcing us to reconsider everything we've taken for granted in the story so far. This is science fiction that Thoreau himself might love!"

Not to mention, a very powerful trifecta weighs in:

"A powerful cocktail of the strange and the hauntingly familiar"
Cory Doctorow, author of Down and Out in the Magic Kingdom

"With his immaculate prose and perfect structural tricks, Kelly's book offers a richly satisfying blend of adventure and philosophy" –SciFi.com ("A" pick)

"James Patrick Kelly is one of the masters of science fiction. He imagines futures both high-tech and human, both dizzyingly complicated and determinedly simple, and then sends us to Walden, where simplicity is anything but, and even Henry David Thoreau begins to look disturbingly different"Burn is inventive, moving, and involving. It's James Patrick Kelly at his best, and there's nothing better." —Connie Willis, author of Doomsday Book

And last but not least, Jim has been podcasting the novel.

I’m pleased to report that James Patrick Kelly has agreed to walk the plank, with unpredictable results. 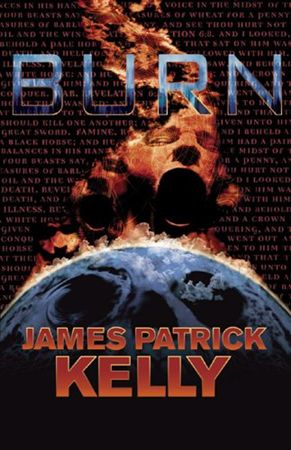 Why should readers pick up your book as opposed to, say, just about anybody else's book?
I'm pleased to announce that BURN is easier to pick up than any other book you can imagine. Since I was able to take advantage of Space Age Diction, I've made BURN incredibly light. In fact, this book weighs a scant .34 kilograms on earth, or .13 kilos if you're reading me on Mercury and a mere .86 kilos on the surface of Jupiter. I was able to achieve this by eliminating most adverbs; in their place I have made extensive use of the latest polymer verbs. By the way, for all of you Hugo and Nebula nominators — and you know who you are — I'm pleased to announce that even though BURN looks like a novel and plots like a novel and quacks like a novel, it is in fact, a very long novella.

Does your book have any socially redeeming qualities? If so, what are they?
I'm pleased to announce that any high school or college student being forced to read Henry David Thoreau's WALDEN can give BURN to their teachers instead of writing that paper that was due last Thursday. I guarantee no less than a B- or I will refund the cost of the book. BURN proves that almost everything Thoreau said was wrong, wrong and wrong. By the way, did you know that HDT once started a forest fire?

Does your book have any medicinal or mental health value to readers?
I'm pleased to announce that the deadtree version of BURN is more or less inert and can be ingested without harmful side effects. On the other hand, those downloading the podcast version should be warned that it can potentially induce a hypnagogic state, with resulting visual and auditory hallucinations. Do not listen to this book while driving or operating heavy machinery.

Assume your book has been filed under "Ages 8 to 12" in the children's section, perhaps by mistake, perhaps not. How horrified do you imagine a child would be after reading your book, and why? How many years of therapy would the child take to recover from the experience?
I'm pleased to announce that no children can possibly be harmed reading my book. I've read Chapter One to several K-8 focus groups and have noted soporific effects roughly equivalent to those brought on by our President's Saturday Morning Radio Addresses. Moms and Dads take note! I have four other novels that can be put to similar use when the kiddos get tired of falling asleep to this one.

Why do you insist on writing so many short stories?
I'm pleased to announce that coming within a few hundred words of writing a novel has so traumatized me that I will be able to write nothing but haikus and greeting cards until a Democrat or a human being is elected President.

If no one buys your book and you are unable to continue publishing your fiction due to the intense vilification that occurs in the media, what line of work will you go into?
I am pleased to announce that I have already joined the faculty of the Stonecoast MFA in Creative Writing low residency program and will be teaching the next generation of literary tyros how not to write novels just like me.