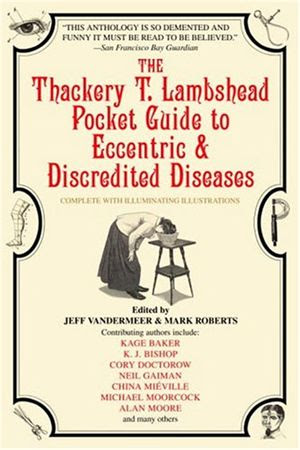 The Thackery T. Lambshead Pocket Guide to Eccentric & Discredited Diseases edited by moi and Mark Roberts has made a rather large splash in its re-release in trade paperback by Bantam Books. Editor Juliet Ulman and Bantam's PR and Marketing departments have done a marvelous job with the book. It's selling briskly around the country and has been prominently displayed on the new trade paperback release tables in the chain bookstores.

Last week, Entertainment Weekly did a spotlight profile of the anthology. This week, you can find pop up ads on sites such as The Onion. And I'm also delighted to announce that the Guide is a Booksense Top 20 Pick for June. We're very appreciative of the indie bookstores for continuing to support this anthology so enthusiastically.

It's a bit of a rush to see a book I helped create available so widely. Until this Bantam release, distribution for my books has been spotty. Now I can't wait until Veniss Underground comes out from Bantam in September.

Thanks to all of the contributors for making the disease guide such a unique and enjoyable experience.


(Evil Monkey: "So...now you're using this blog for sheer self-promotion. Nice." Jeff: "Well, it is my blog. And I usually promote other people's work here. So I'm not going to worry about it." Evil Monkey: "What you should worry about, my friend, is that you're still listening to that Eisley crap." Jeff: "Hey--it's not crap. It's actually pretty darn good. Golly Sandra is a great song--summer pop with a slide guitar. Besides, that song has a great opening line: 'Golly Sandra, you've grown up really crazy.'" Evil Monkey: "It does not exist in the same universe with Spoon, dude." Jeff: "Shut up.")

Funnily enough over here (Australia) I've seen City and Veniss all around the place, but have yet to see Thackery. Probably a distribution thing, as it seems to be available for purchase online...

Ben from the Gong

Hi Jeff, great news indeed! I'm a forum mod over at SFFWorld and for a while, there were banners for the book appearing at the top of our pages.

My wife specifically pointed out the book in EW when it was mentioned knowing how much I enjoyed the book.

Lastly, I'm also an official reviewer at SFFW and recently posted my review of the Guide. As I said there, at its heart, this book is just a lot of fun.

Hey, that's great. It makes me happy to think a book as weird as this could be commercially successful. Hopefully I'll be seeing it in the local bookstores sometime soon.

Very nice blog, hard to come by these days,

If you have a chance, can you visit my how to play guitar site

It has all guitar related stuff.

I did not have time to read your intire blog, so please forgive me, but I wanted to take the opportunity to invite you to look at mine for a way to better manage our unwanted goods using these services encan hgregoire and others like encan hgregoire, thanks for reading me