As everyone should know by now, R. Scott Bakker and I have been friends for a long time. We first met near Samarkand in 1987, where he was researching a little-known warrior sect and I was deciphering evidence of a vast body of water where now there naught but desert. It was my hope to prove that cephalopods of a freshwater variety had once claimed the area as their uncontested domain. Oddly, Bakker’s research and mine coincided when he deciphered some long-buried cuneiform about his warrior sect as “squid heads”. At once we decided to split up our findings—he would use the warrior sect angle as the foundation of his nascent series of heroic fantasy novels and I would focus on the consequences of squid when injected into fiction. I believe he thought back then that I’d gotten the better part of the deal, but there seemed no other way to be fair. 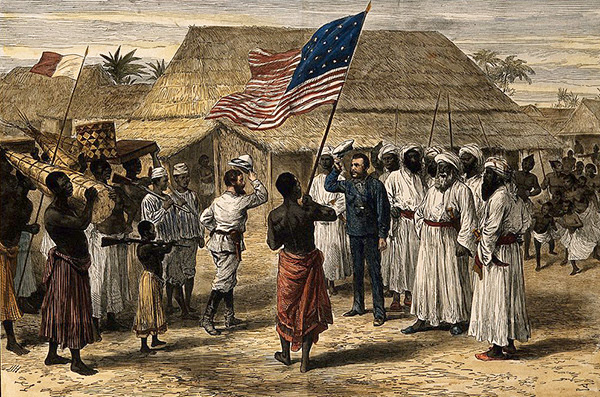 A rather fanciful rendering by a passing expert at etchings of my meeting with R. Scott Bakker in the Congo. This particular artist, Buckwaldo Mudthumper III, depicted everything in terms of the missionary David Livingstone’s exploits, alas.

The second time we met, it was on opposite sides of a tribal struggle in the Republic of Congo, about the time Redmond O’Hanlon wrote his classic No Mercy. By the 1990s, the middle of Africa was a political mess. With no choice but to acquiesce, we each at the same time agreed to serve as mercenary muscle for different villages in the interior. So it was that whilst engaged in a fire fight across a damp bit of creek that I saw a familiar face through the scope of my submachine gun and shouted out, “Scott! Is that you? It’s Jeff! Remember the squid?!” Mercifully, he did, as he was at that moment aiming a grenade launcher at me. Our resultant meeting was fortuitous in that we managed to patch things up between both villages. The military force that arose from that encounter was strong enough to bring us to the capital, and then onto a plane secretly chartered by the CIA back to our respective countries for a rather sound debriefing.

I’m afraid our third meeting was anti-climactic. At the 2003 World Fantasy Convention, we were on a panel together about “the death of SF,” a subject we knew nothing about. Instead of talking about it we recalled our meeting with a CIA operative named “Brandy Wine” who told us, while flying back to the West, that several supposedly dead SF writers had been abducted by the CIA and were having their “brain juices” analyzed for any possible future-telling ability applicable to various regional conflicts across the globe. After that, we had a rum-and-coke together, lit up some smuggled Cuban cigars, and closed the night out with a rousing chorus of “Hey Nonny Nonny” from the roof of the fine establishment that housed the convention.

Our recent “tiff” (cooked up by our mutual publicist, I.C. Noureesen) aside, I have not seen Scott since, so I thought it would be a good idea to interview him as to his literary exploits. His fixation with warrior sects has gotten him far indeed, as Publishers Weekly notes:

In the shattering climax to Canadian author Bakker's magnificent fantasy saga (after 2005's The Warrior-Prophet), the Holy War army has finally reached the gates of the holy city of Shimeh. The warrior-prophet, Anasûrimbor Kellhus, learns that the Thousandfold Thought, a great "transition rule" that promises to transform the two warring faiths of Inrithism and Fanimry, offers the only way to bring peace to the world of Eärwa and avoid a Second Apocalypse...A large and varied supporting cast of heroes and scoundrels add further emotional realism. The Prince of Nothing trilogy is a work of unforgettable power.

You can buy his books in the UK and the US

Scott was thoughtful enough to reply via email rather than the stone tablet postcards that have been our little joke on the postal service for the past twenty years (making this process much faster).


Why should readers pick up your book as opposed to, say, just about anybody else's book?
The obvious answer is that I get a slice of every dime they spend, whereas if they purchase, say, your books, I don't see a red cent. The not-so-obvious answer is that I could be writing what they're looking for. If your imagination was scarred by Tolkien, yet you feel as though you're 'out-growing' the genre, or otherwise suffering epic fantasy fatigue, then there's a good chance that I have the book for you. I take the EPIC part quite seriously.

Does your book have any socially redeeming qualities? If so, what are they?
Many people seem to think my books are sexist. Some people think them wantonly violent and nihilistic. Others blasphemous. I happen to think they have social value precisely because they provoke people to debate these things. But one of the creepiest facets about getting published is the realization that you really don't control the meaning of your works anymore, that post composition, the writer really becomes just one more reader, one more perspective. This is why people should call me to account on questions of social value. I'm just another interpreter, just as liable to be wrong. And I take risks.

Does your book have any medicinal or mental health value to readers?
I've received correspondance from the world over from people thanking me for the way these books have loosened their bowels. Apparently in Poland, where I'm huge, sales of the Metamucil have plunged 16.7%. These books literally make people shit. Out with the bad, I say.

On the flip side, a lot of people seem to take up smoking after reading them. Here in Canada, where I'm pretty big, the number of illegal 'grow-ops' has increased some 59% since The Darkness That Comes Before was released.

Some shit is good.

Assume your book has been filed under "Ages 8 to 12" in the children's section, perhaps by mistake, perhaps not. How horrified do you imagine a child would be after reading your book, and why? How many years of therapy would the child take to recover from the experience?
Not all trauma involves horror. Kids tend to be pretty stupid. I mean, they don't even know how to drive. You can't even leave them alone without locking them up, or paying someone to guard them. The vast majority of them actually believe in things like 'Santa Claus' or - get this - the 'tooth fairy.' That tells me that they're simply not rational, and if they're not rational, there's no saying how they would react. For all I know they would giggle all the way through my books.

(My wife gets mad at me when I talk like this, but I don't see what the worry is. What are they going to do? Beat me up? Kids are not only stupid, they're also pretty wimpy. I could take 20, maybe 30 of them at least. More if I had weapons.)

Why don't you write more about cute stuff? Why all the drama?
'Cute,' as they say, is in the eye of the beer holder. Obviously your hand is empty. My books are packed with cuteness. I just use all the murder and mayhem for contrast, you know, to really make it special. I mean, really, what does a flower mean in a floral shop? Graveyards are where all the real work is done - in both senses of the word.

If no one buys your book and you are unable to continue publishing your fiction due to the intense vilification that occurs in the media, what line of work will you go into?
Politics.

So exactly at what point was Kum Ba Ya sung?

I almost shit in my pants while reading this! Great stuff, the two of you! But I'm still waiting for the final definitive connection (connexion?) between the squid-heads and the presumed 'death' of SF. Should I still be holding my breath for that?

Very well done indeed. I do belive I shal make an effort to find and read your books now :) Cheers

This is terrible, just terrible! While you two were fighting I felt the world was somehow safe. But now that the squid and the warrior sect have joined forces, who can stand against them? Who will speak for the peaceful men and women who don't really like seafood (especially that weird stuff with tentacles)?

We're doomed - DOOMED, I tell you!

Tht top amazon cover pic of 'The Thousandfold Thought' is absolutely terrible. It looks like Grey Cap feces (Which doesn't imply Jeff shitted on Scott - or does it??!! Do grey caps have feces?) I have thought that for months when trying to pimp the books myself, and wanted to use that cover to post. In reality these cover treatments are absolutely class.

Is it true that Erik Von Danniken approached you both at Samarkand and stole some of your notes to use for the chapter The Squid Among Us in the Chariots of the Gods are Parked By A Hydrant? Or did he just make that bit up too?

A couple of points:

-I agree with Jay. What a horrible rendition of The Thousandfold Thought.

-Scott, I hate how you always say things I can't understand. Stop that.

-Jeff, you need to read Scott's work. If for no other reason than its bloody criminal it has yet to be even nominated for an award. Since you're Mr. Big Shot WFC Judge and all...

hmm...I suppose I'll do my duty and alert Jeff and Scott to a potential threat to their work on squid heads.

Well done, guys. Nice to see that each handshake is as firm as ever, and that each cheek has been thoroughly exposed for a damn good slapping but...you turned it guys. Congrats. Yep, turned it good and proper, like.

Warren--I can't comment on the WF Award process this year. All I can say is that historically the second and third books of series have fared poorly because they're not seen as complete in and of themselves.