THE BLISS OF BAF 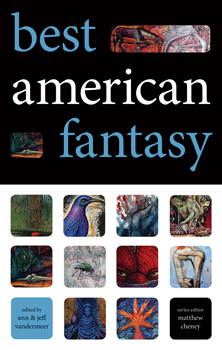 I thought that, having posted something about the negative aspects of doing so much reading in magazines, anthologies, and online venues for Best American Fantasy, I should comment on the positive aspects. (I should note that I'm only speaking for myself, not for Ann VanderMeer or Matt Cheney.)

We found more than enough excellent material to justify the anthology, for one thing. Given our brief to be very inclusive of American literary magazines, in addition to looking at publications devoted to genre work, this was a relief and a pleasure. That we found variety and also depth made the reading experience a very pleasurable one. On some fundamental level, I felt extremely blessed to have the opportunity to sit down and discover so many fascinating fictive voices.

We went into the reading experience with the idea that to properly express the idea of "Best American Fantasy," we should be open to excellence put to many different purposes, some serious, some less so. For this reason, our selections run the gamut from experimental to traditional, from clever to deep, from intricately plotted to slice-of-life narratives. I'm very excited about the juxtaposition of voices and writers in this anthology.

We also went into the reading experience with the idea that "fantasy" is not just about the reality of a fantasy element on the page but that it also exists on the metaphorical level, and in the texture and intent of the prose. Some writers and some stories are clearly fantastical or fabulist even if they do not contain any clearly-defined "fantasy" element.

This is the first year's best anthology I've helped edit, and there is a different kind of pleasure involved than that of reading for an original anthology. Reading the slushpile for an original anthology is, I think, a much more difficult and strenuous job. It is a job fraught with peril and sometimes indecision. Because you really are the gatekeeper, the arbiter. If you pick something that isn't actually good, or accidentally dismiss something good, it's all on you. You have a very intense pleasure of discovery when you find something good from someone new or something unexpected from someone established. But inbetween these highs, you have the daily, weekly slog through the mundane and depressing world of mediocrity, incompetence, and unrealized potential.

Reading for BAF, you're a gatekeeper of a different order. Despite my grousings about DOA stories in professional publications, you are still, mostly, dealing with a different level of technical competence. And at the highest heights, you are determining (in at least one case, I believe) between genius and mere excellence. The endorphin high from this kind of selection process is nearly constant, addictive, and very satisfying. Merely to have access to such riches is intoxicating.

So to say that reading for BAF has been fun would be an understatement. The discussions and arguments with Matt and Ann have been especially fun, because they're within this context of "good" versus "great".

It is also exciting to be helping create the foundation for a series relatively unique within the fantasy genre. After year two, Ann and I will no longer be the guest editors. Matt Cheney will continue to serve as series editor for stability, but each year will bring a new guest editor and thus a different set of assumptions, prejudices, likes, dislikes, and values. Why is this important? Because each editor has favorite writers, no matter how one tries to keep impartial. Revolving editors should provide a measure of equality and fairness. Literally, although some kinds of excellence remain objective--or at least objective to a larger rather than smaller number of people--you should see wild variations in the writers selected each year. This is a good thing, a way of celebrating diversity, of keeping things fresh.

In addition, by emphasizing literary magazines and online venues, while not ignoring traditional genre publications, BAF will most likely continue to have radically different contents from other fantasy year's bests, in most years. It is therefore serving a valuable function and will be of interest to readers for this reason.

I am reluctant to get into specifics about story selection since we are still sending out acceptance emails, and because the contents will not be revealed until publication in June, but I cannot stress enough how much fun this process has been and how uplifting. In some ways, I had lost faith in the fantasy short story over the last few years. So little material had moved me, made me think, or made me gasp in appreciation at the audacity of it. But this in-depth immersion in the entirety of American fantasy in the short form has made me realize just what a wealth of great literature is being produced by writers from the U.S. and Canada.

Your description sure makes the content of the anthology sound good, but I'd like to add that, refreshingly, the cover looks good too. I was struck this year by how bad the covers were for many of the other year's best fantasy collections. That's personal taste talking, to an extent, but it seemed as if the publishers were asking me _not_ to buy those books; they certainly wouldn't charm anyone not already a hardcore genre aficionado.

So congratulations on the aesthetic appeal of the volume you, Ann and Matthew are working on, inside and out.

Buy Proactiv Solution here and get 50% off.

very nice blog.Thanks for sharing such great information for me. I hope you will share some more information about Please keep sharing!