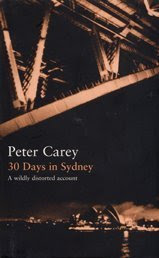 One of the coolest little nonfiction books I've read in recent years is Peter Carey's 30 Days in Sydney, an exploration of Sydney and of Australia. Driven by the four elements, the book dips in and out of aboriginal issues, house fires, theft, dangerous terrain, homeless prophets, the urban scene, and a ton of other topics. I love eccentric "history/travel" books like this one, shaped so utterly by the author's personality. I think the Globe and Mail put it best:

Now, a table full of Aussies, especially when they’re working their way through a serious bottle of red, tell a great story. And who better to capture, and then embellish these colourful characters and their versions of Sydney than one of Australia’s most important novelists. It is a masterful portrait of Australian masculinity—in all its bravado, insecurity, complacency, intelligence, baseness, gentility, larrikinness, and humour.

Through mouthfuls of John Dory at poncey restaurants and hangovers at Bar Colluzzi, one minute the Carey mob are putting out bush fires, the next nearly drowning during the Sydney to Hobart yacht race. You’re right there with them, not actually at the fire or in the ocean, but there at the table downing the grog. You egg them on as they allude to names of Sydney’s crooks and politicians, parsing the difference between the two. And along the way you get some good dirt on the sometimes sad social history and stunning geography of one of the most impressive cities in the world.

But getting back to the homeless prophet mentioned earlier--I love this quote from the book about the guy, who is fascinating to the "utilitarian" people of Sydney:

You might think this no great puzzle. But it is a puzzle--we generally do not like religion in this town, are hostile to God-botherers and wowsers and bible-bashers. We could not like Arthur [Stace] because he was "saved," hell no! We like him because he was a cockatoo outside the brothel, because he was drunk, a ratbag, an outcast. He was his own man, a slave to no one on this earth.

Or this, about a devastating series of wildfires:

There was absolutely no information on the [radio]. There were fires all over Sydney but they had scheduled a broadcast of Arab lesbian quatrains and nothing was going to change their minds.

30 Days in Sydney is raucous and raw and full of wonderful details. Throughout the book, one thing is clear: Carey loves Sydney and loves Australia. It's that love that infuses the book with its special character.

I've never read any Carey before and, though this travelogue sounds like a good read, it doesn't seem like the place to start.

Any good, essential novels from Carey that I MUST read?

i like carey's book, but the problem with it is that it's the tourists tour of sydney, tipping homage and hat to the things he thinks are culturally revelant (aboriginal land rights and so on). it felt to me the kind of book one would write if you lived in new york for ten years and returned for a vacation.

the biggest problem of the book, however, is when he tours down parramatta road, up to the mountains. around 70% of sydney lives in that area, and it's a stinking mass of cultures. and he just passes it over. seemed a shame. but, that said, it's a not bad book--you might be interested in checking john birmingham's LEVIATHAN, for a foil history look at sydney. it's a bit of a fat book (it could have been slimmed a lot) but its well written and interesting.

as for peter carey books to read, he has a collection of short fiction that is a nice place to start. TRUE HISTORY OF THE KELLY GANG is one of his most ambitious, i think, and quite successful. i'm quite fond of it, myself.

I liked OSCAR AND LUCINDA very much (his other Booker Prize winner) - I would say it is the best of his I've read - an intense book and absorbing read. Also very much enjoyed JACK MAGGS.